An overview of what you can see in the exhibition 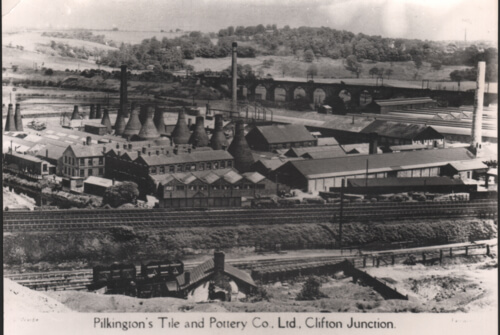 Pilkington’s Tile and Pottery Company Ltd was based at Clifton Junction near Swinton, Salford. They were one of the most important international suppliers of high-quality decorative tiles and art pottery in the early 20th century. Their products were stylish, desirable and expensive, which was perfect for furnishing fashionable middle-class homes. Pilkington’s success was due to superior design combined with technical expertise and good publicity.

The company was formed in 1891 by four Pilkington brothers who were colliery owners. They employed as manager the dynamic William Burton, previously the chemist at Josiah Wedgwood and Sons. Burton encouraged collaborations with leading British designers such as Walter Crane, CFA Voysey and Lewis F Day, producing new, fashionable designs for tiles and pots.

The company began tile making with local clay in 1893, in a spacious purpose-built and ultra-modern factory. In 1904, when pottery production in the Art Nouveau style began, Pilkington’s started to rival known ceramic names like Minton, Bernard Moore, Doulton and Maw & Co. In 1913 the company was awarded a Royal Warrant by George V and began trading as Pilkington’s Royal Lancastrian Pottery Company.

Whilst Pilkington’s continued to produce tiles until its closure in 2010, pottery production ceased in 1938, although it was briefly revived in the 1950s and 1970s. Salford Museum and Art Gallery’s Pilkington collection is the largest in the UK. It contains examples of almost every artist and most types of ware produced by the factory between 1900-1958 and the 1970s. 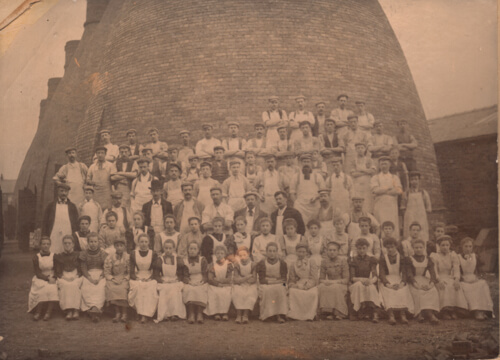 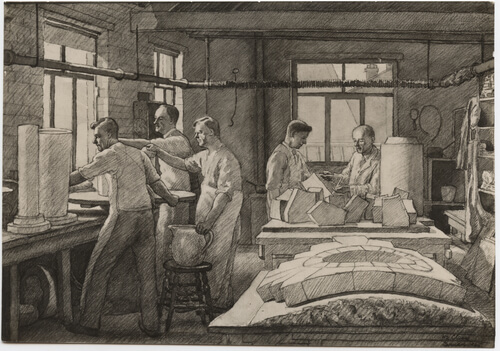 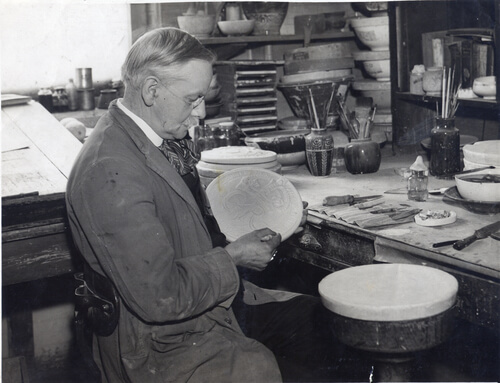 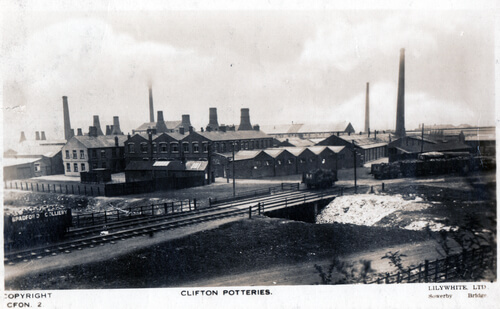 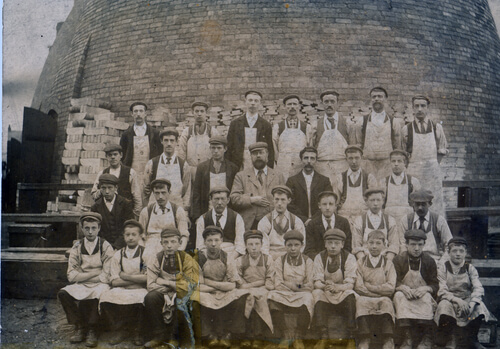 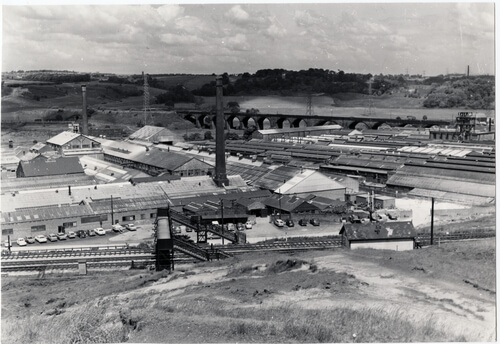 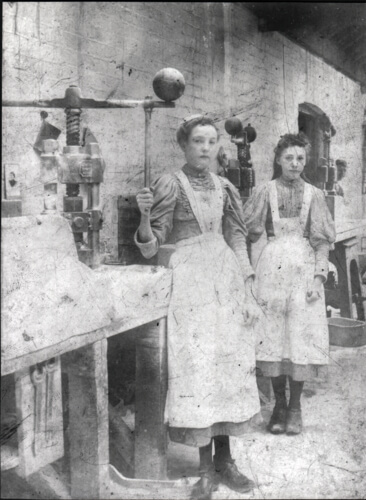 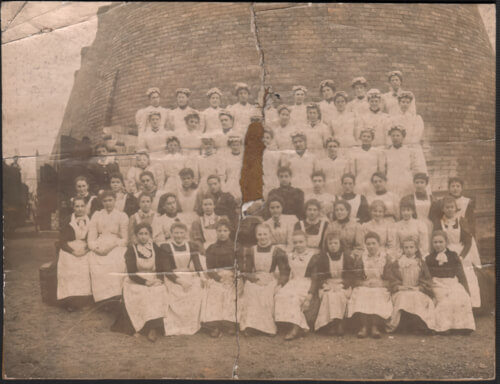 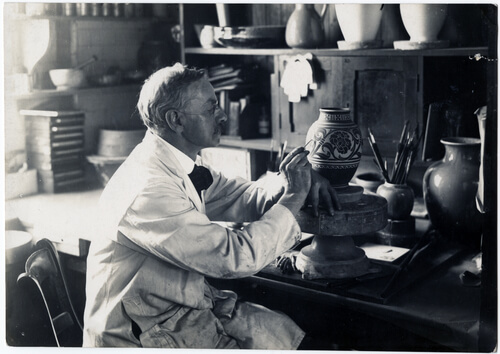 The exhibition at Salford Museum and Art Gallery

We have a permanent exhibition in part of our North Gallery which showcases the gems from our collection. The pots are mainly split into different wares. Chemistry was very important in creating the varied and unusual glazes at Pilkington’s. The chemists experimented with different compounds on their continuous quest for new colours and effects.

In the exhibition at Salford Museum and Art Gallery, you can see fine examples of: 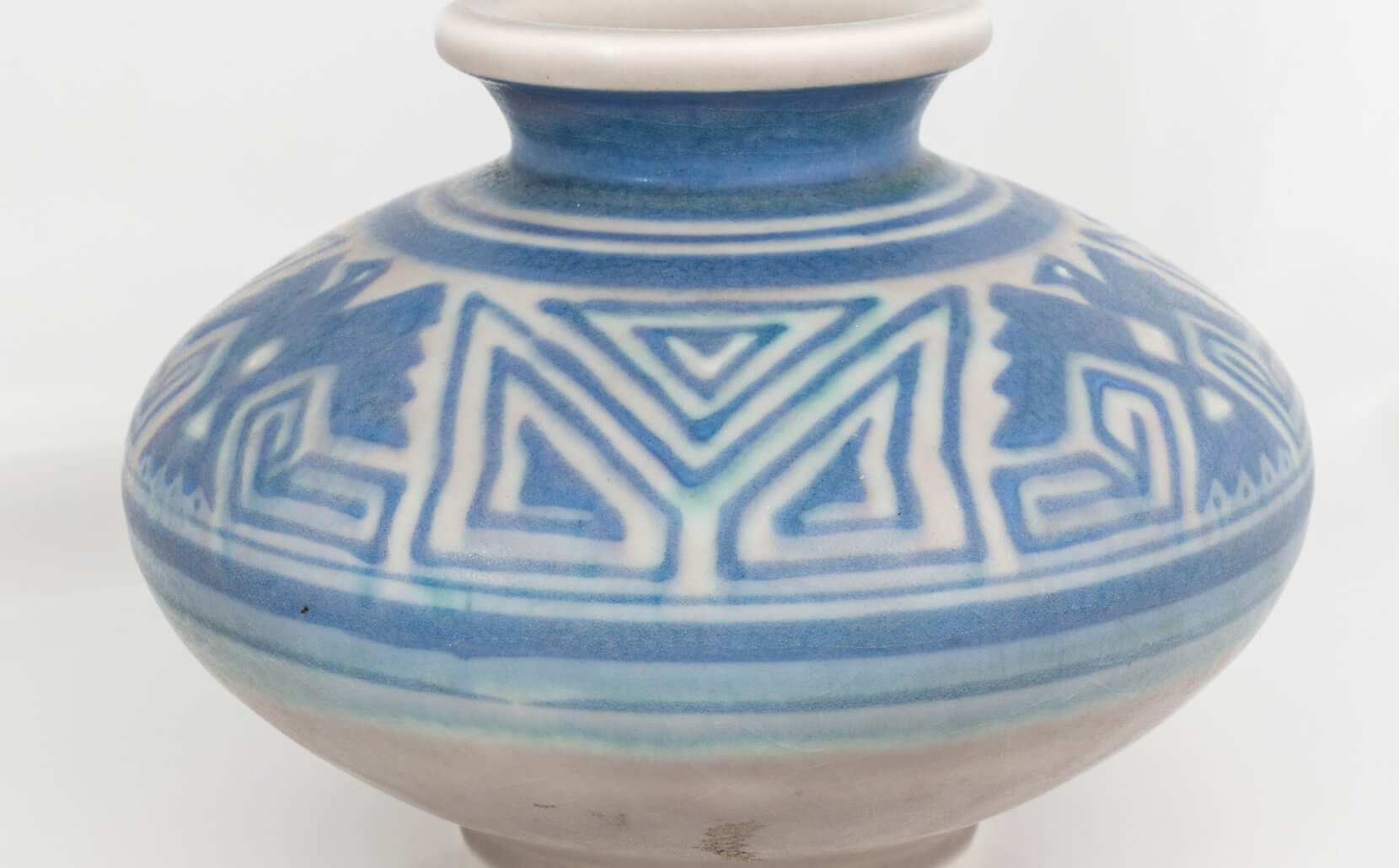 A surface matt glaze which may be uniform in colour or marked. First appeared in 1896. 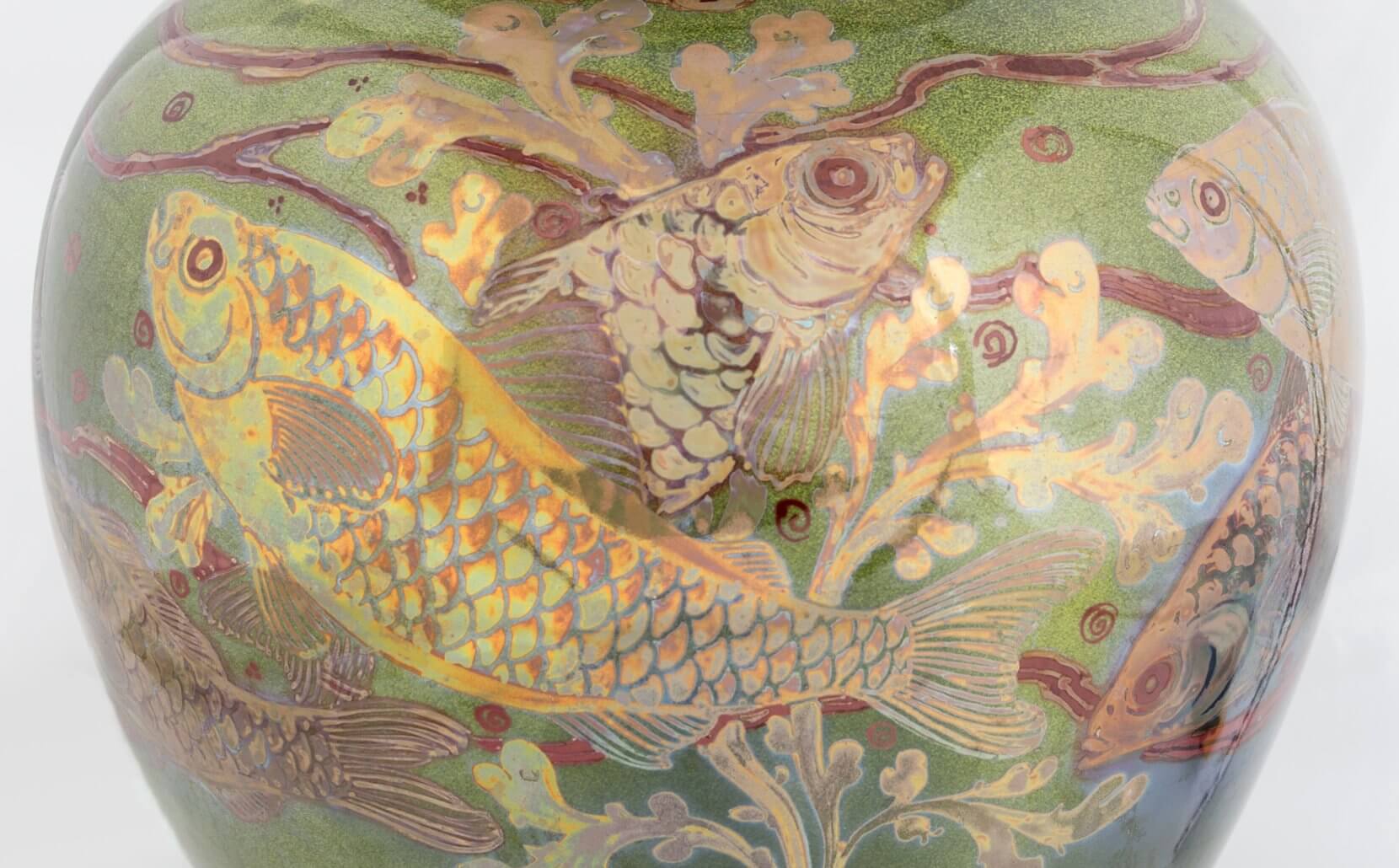 The clay surface was painted with powdered metal which left a shiny metallic coating when fired. Pilkington’s began experiments in this in 1903 and became world famous for this glaze, supplying places like Tiffany’s in New York. 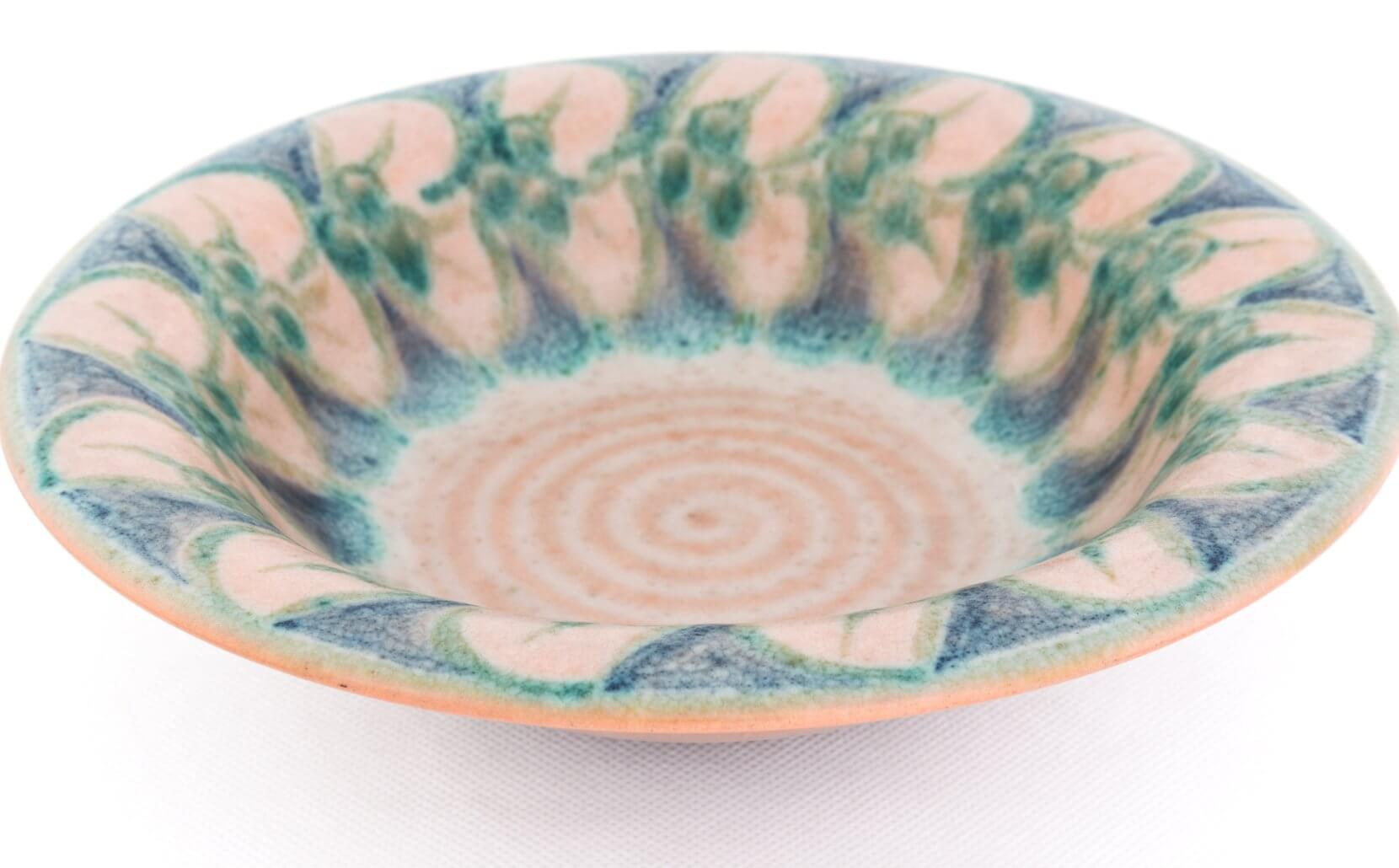 In 1928 Pilkington’s developed this completely new glaze technique. The decoration is in the interior of the glaze and throughout its thickness. The fusion in firing of the pigments and glaze creates soft edges to the design. 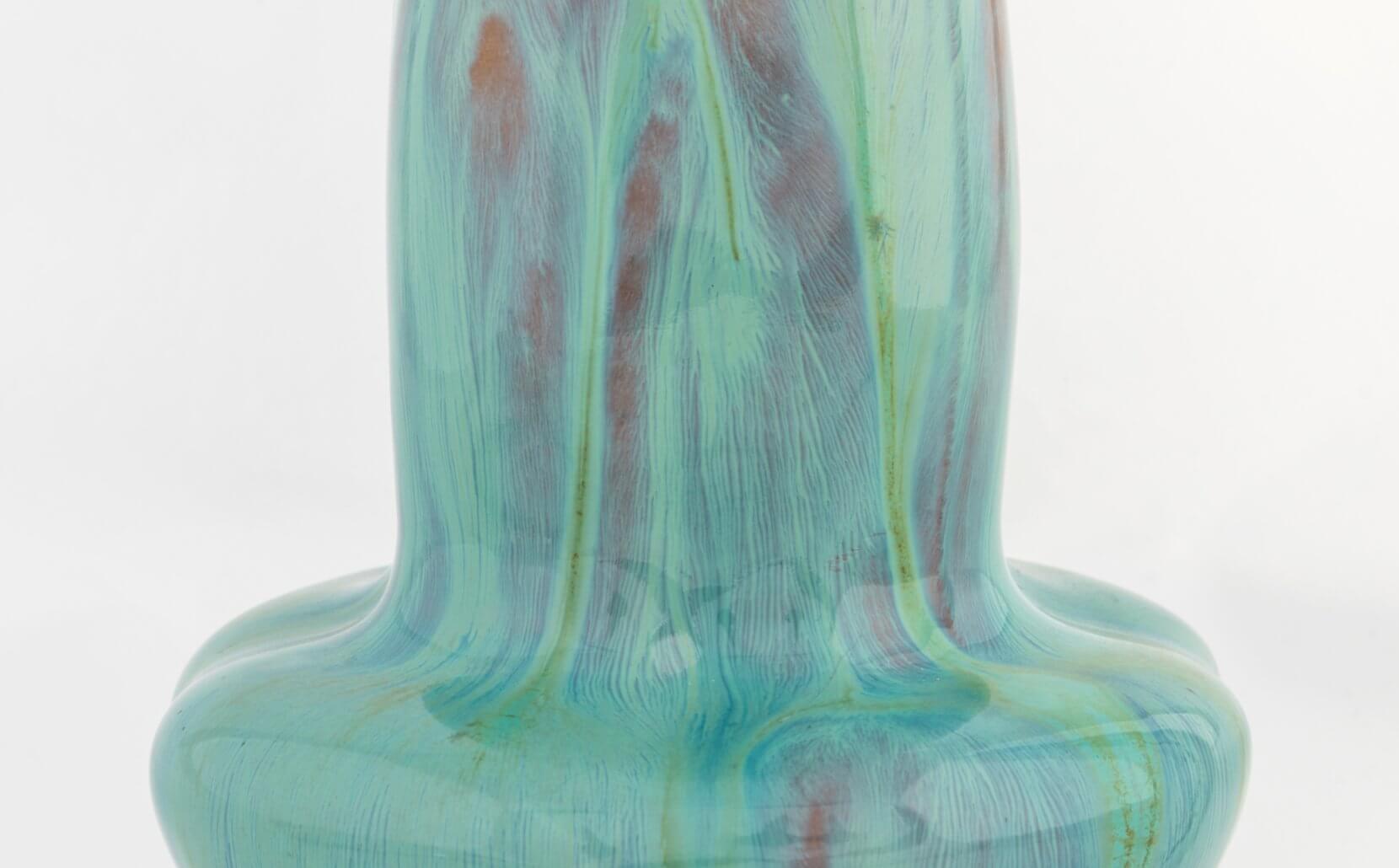 The opalescent glaze was found by accident when glass frit coated the outside of a container during firing. This gave rise to Lancastrian Pottery which was launched in 1904 combining shapes influenced by historic forms with unique and varied coloured glazes. Pilkington’s continued to experiment with over 200 compounds added to the frit to create unusual and magnificent finishes.

As tiles were not only decorative but easy to keep clean and sterile, they adorned hospitals and railway stations, and with mass production, domestic bathrooms, hallways, fireplaces and kitchens.  Pilkington’s was a world class leader in tile design and production. 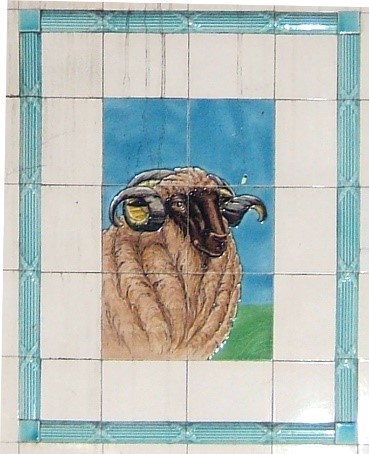 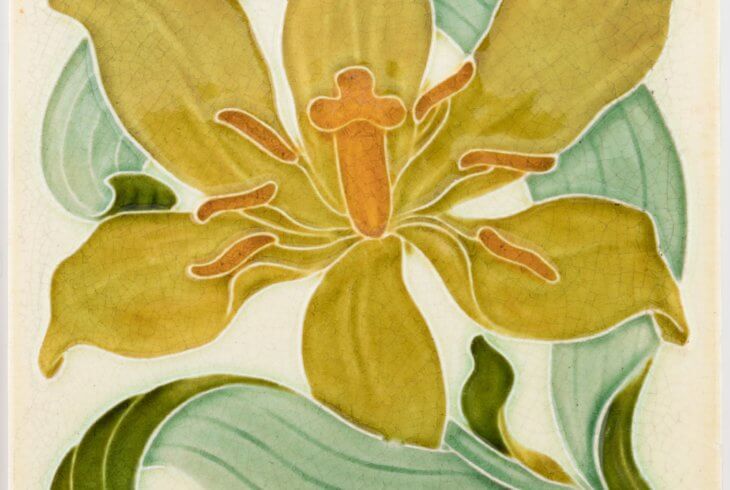 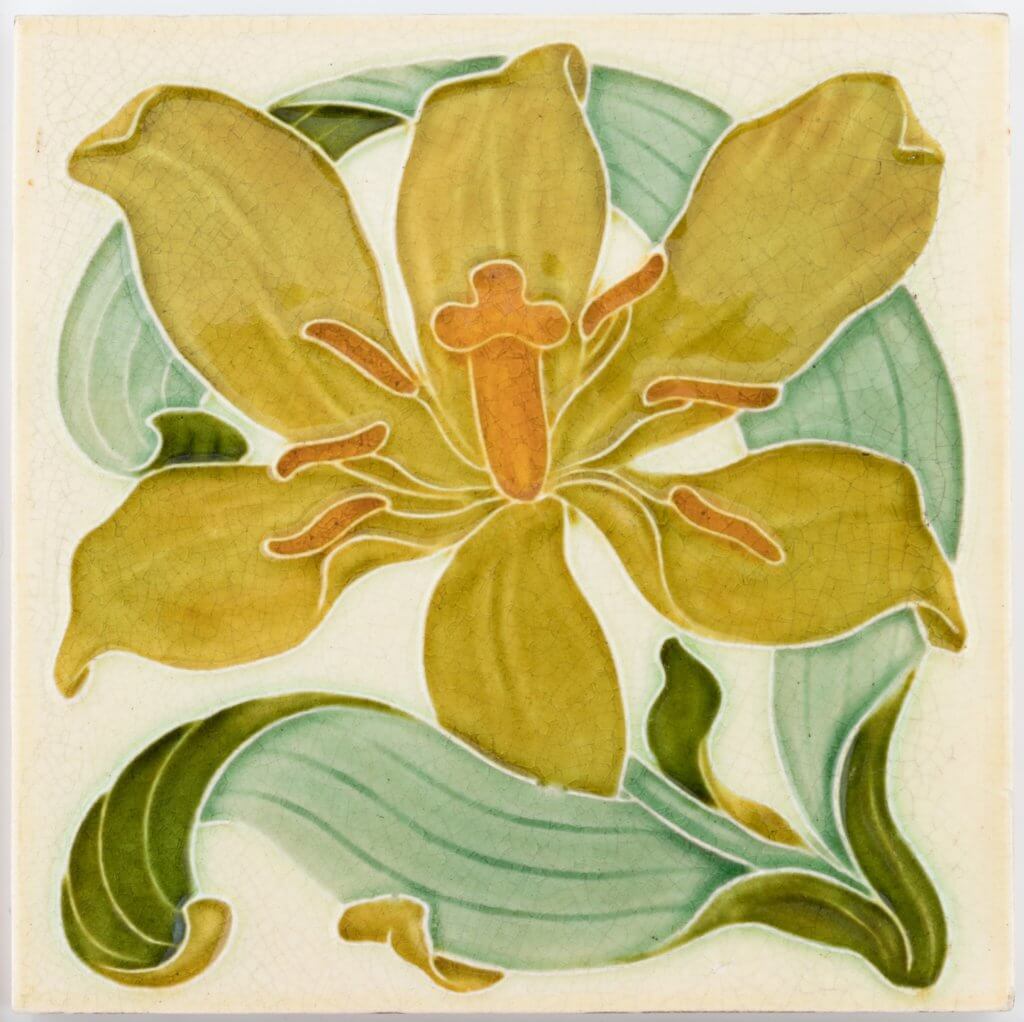 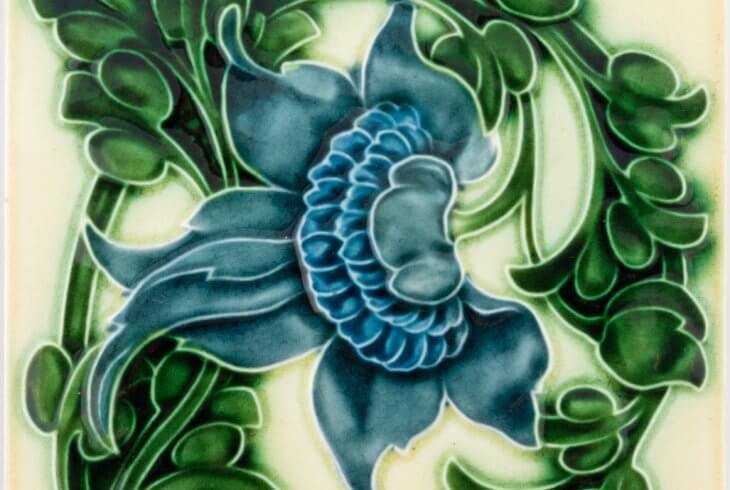 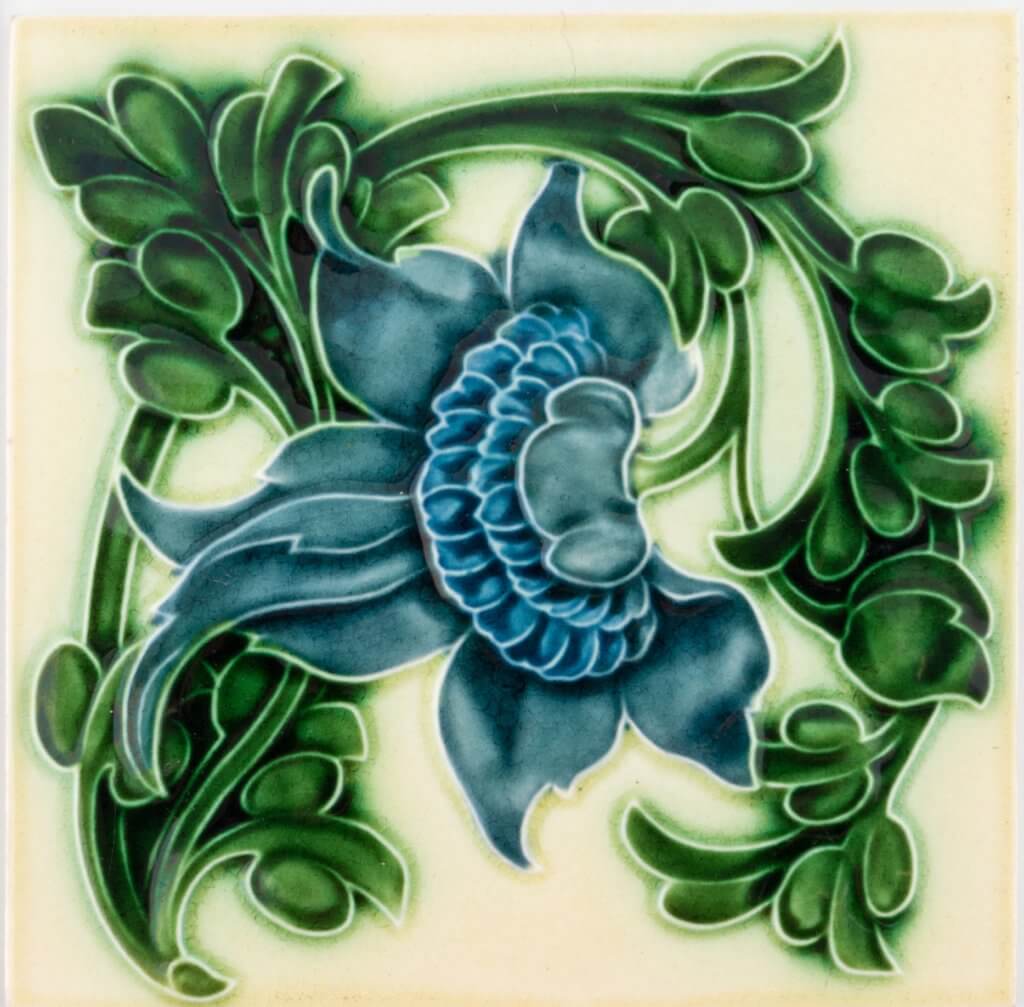 The fireplace on display was built into a house in Fallowfield, Manchester in 1908. Some time later, when the owner sold the house to a developer, the owner’s nephew luckily decided to save some of the architectural pieces, this fireplace being one of them. It was identified as Pilkington’s, and with the help of the Friends of Salford Museums Association, Salford Museum and Art Gallery bought the fireplace in 2001 and got it restored.

From the mid 19th century there was a growing interest in designs from the Middle East based on Muslim decorations. The ‘Persian’ style of tile was named after Persia, the old name for Iran. These designs were rich in abstract shapes created by floral subjects and geometric configuration, as the religion does not allow figurative representation. Pilkington tiles in the Persian style were decorated in blues and greens and often spotted with rhodian red.

The designer of the fireplace, John Chambers, joined Pilkington’s in 1893 as Chief Designer. As head of the architectural pottery department he worked with consultant designers and supervised modellers, engravers and mould makers. He retired in 1938.

In the exhibition at Salford Museum and Art Gallery you can see a large potter’s wheel. This was used by Edward Terence Radford who worked at Pilkington’s from 1903 where he was the first potter to use a potter’s wheel. He was extremely skilled in throwing pots and was one of the top earners amongst non-management. It was said he could make a teapot of wet clay and then make a lid which fitted perfectly, entirely by eye, taking no measurements. He would throw tiny 2 inch pots called ‘twifflers’ for children, to huge exhibition pots up to 3 foot high. The wheel on display is one he used to demonstrate pottery throwing at exhibitions and occasionally in shop windows. It was worked by an assistant who kept it turning at the speed he needed. It was donated to Salford Museum and Art Gallery by Manchester Art Gallery in 2009.

When the company closed in June 2010 Salford Museum and Art Gallery acquired the Pilkington company archive with help from the Friends of Salford Museums Association and an anonymous donor. The archive contains pattern books, notebooks and company documents. We show a small selection of these on rotation within the exhibition. 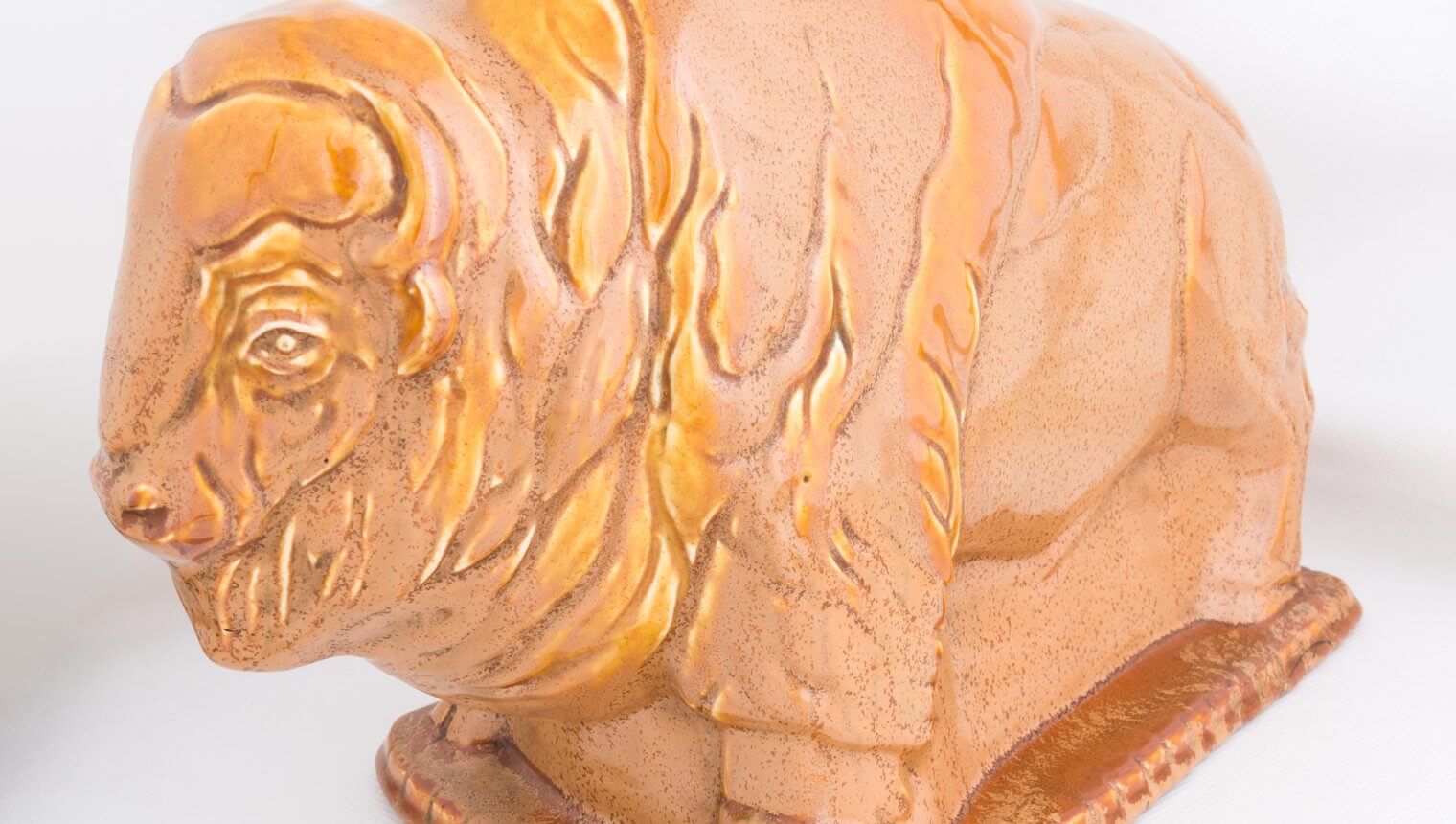 Figure of a bison by John Spencer, c1950s 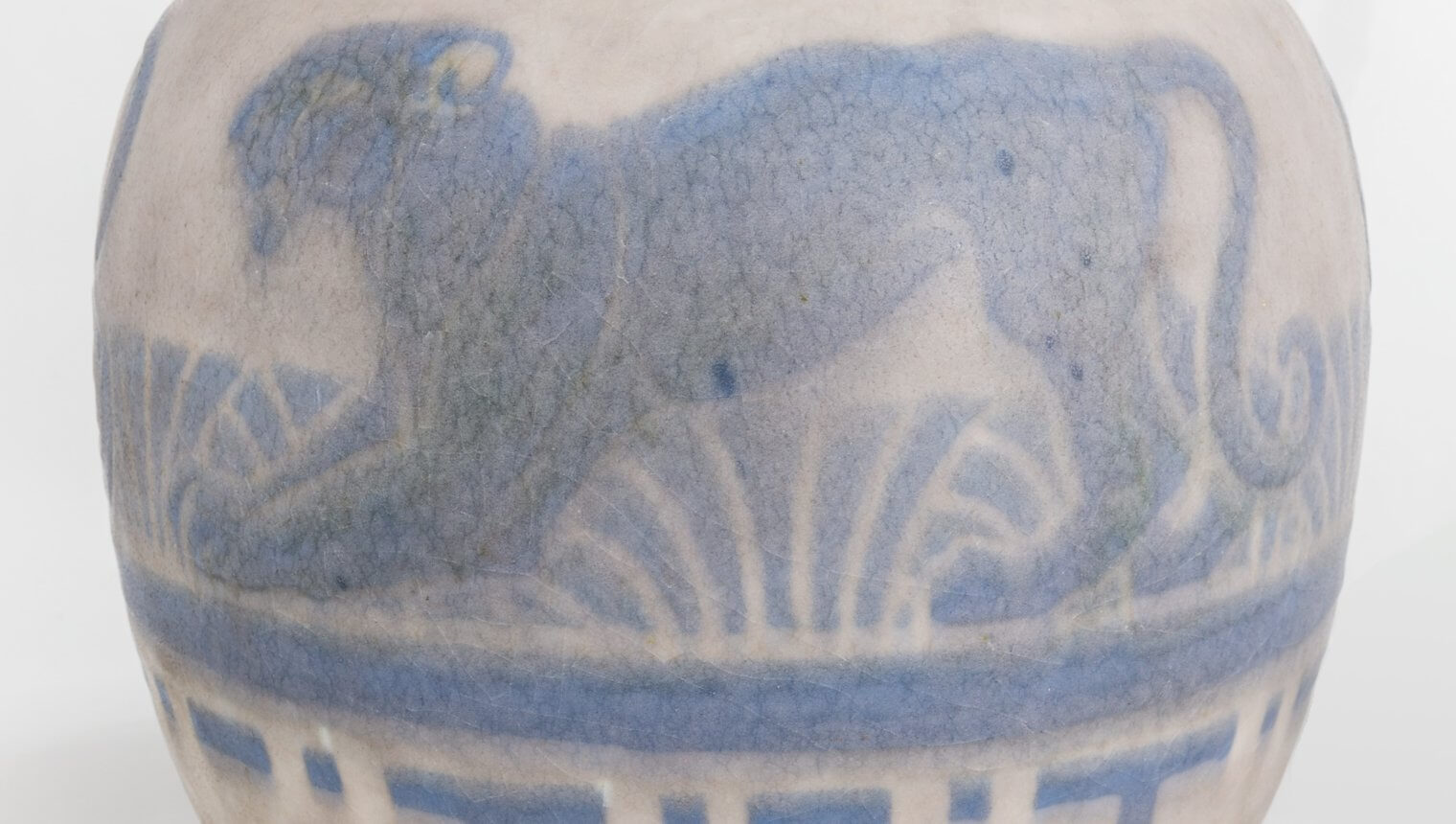 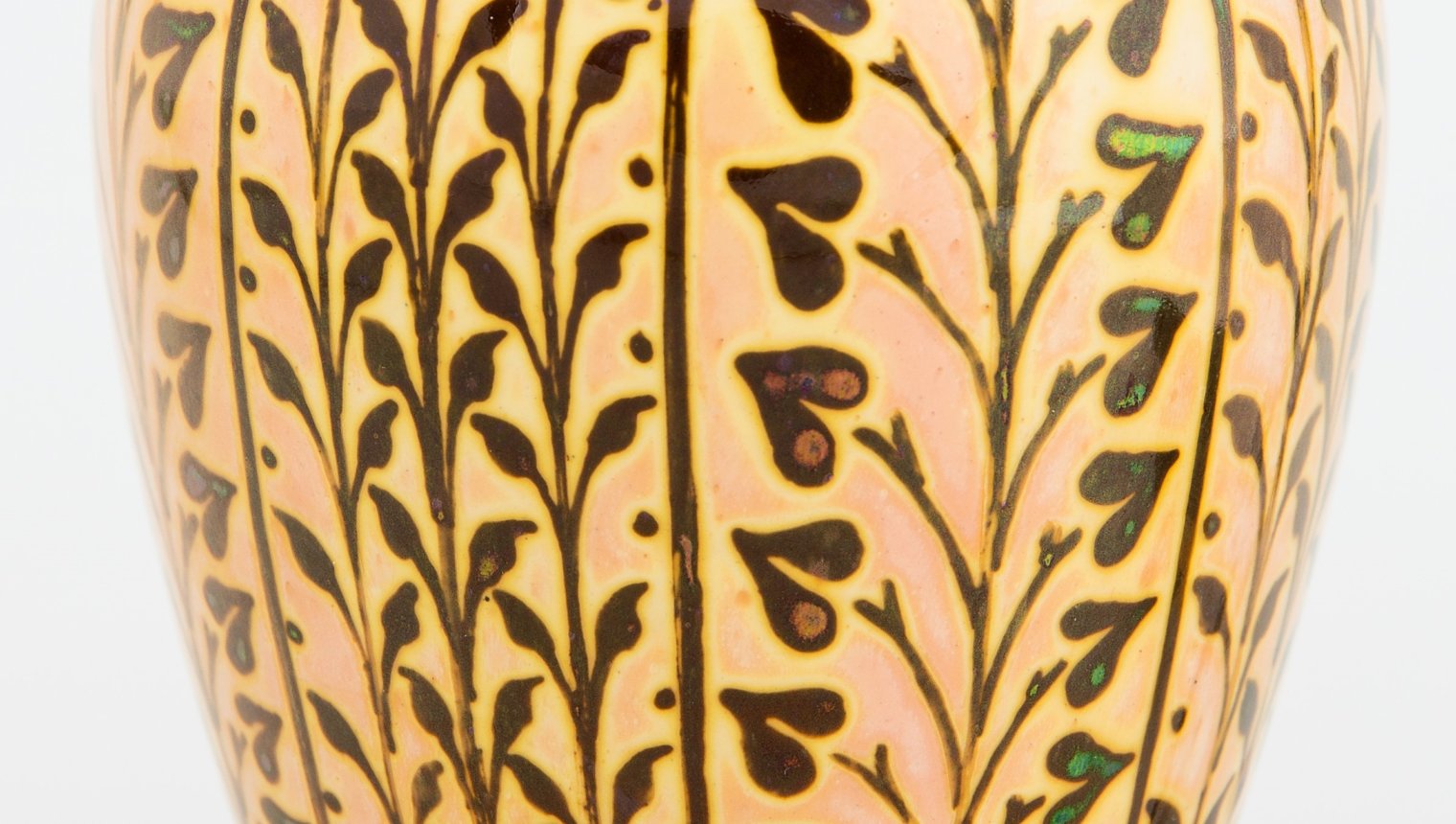 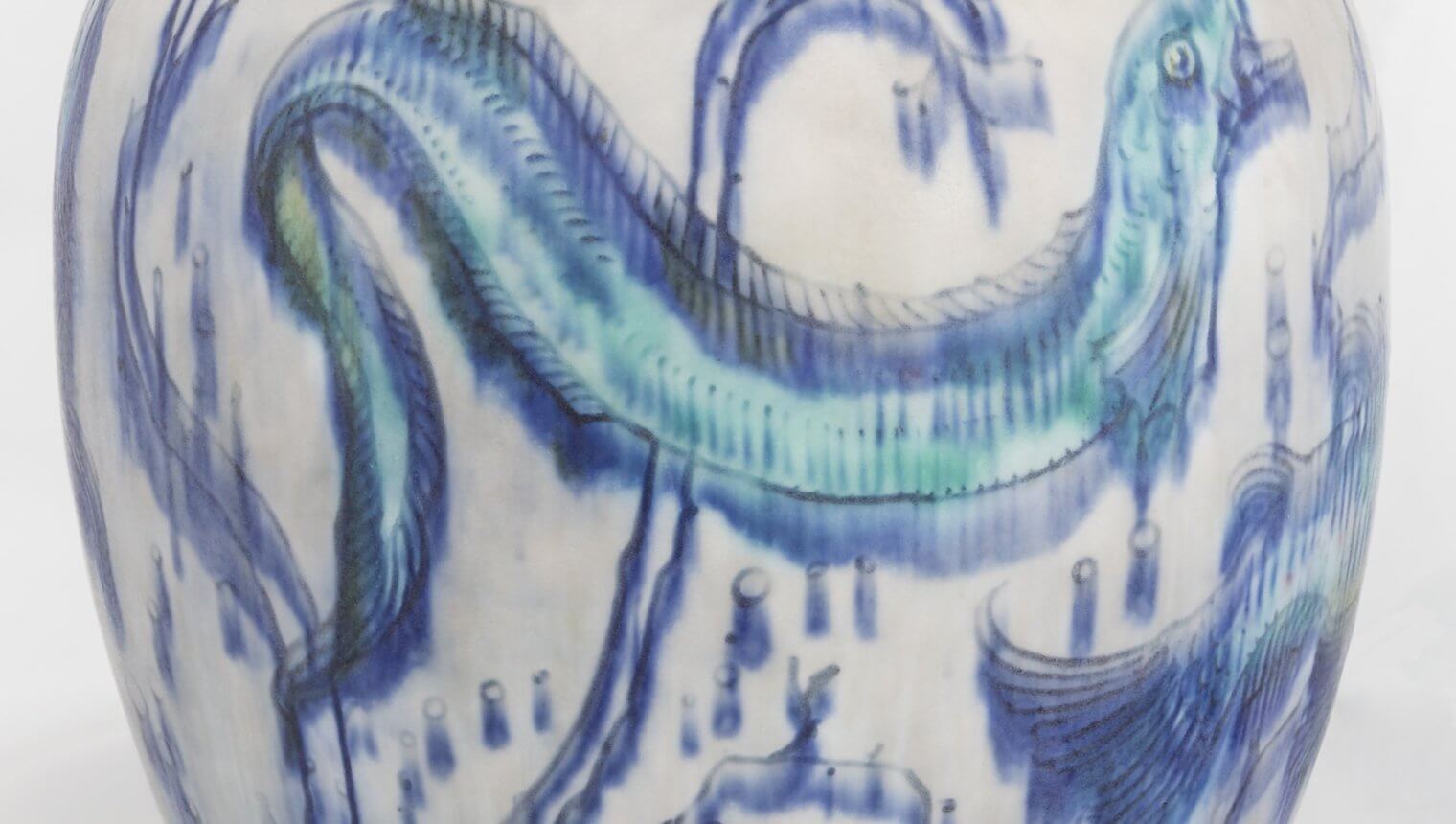 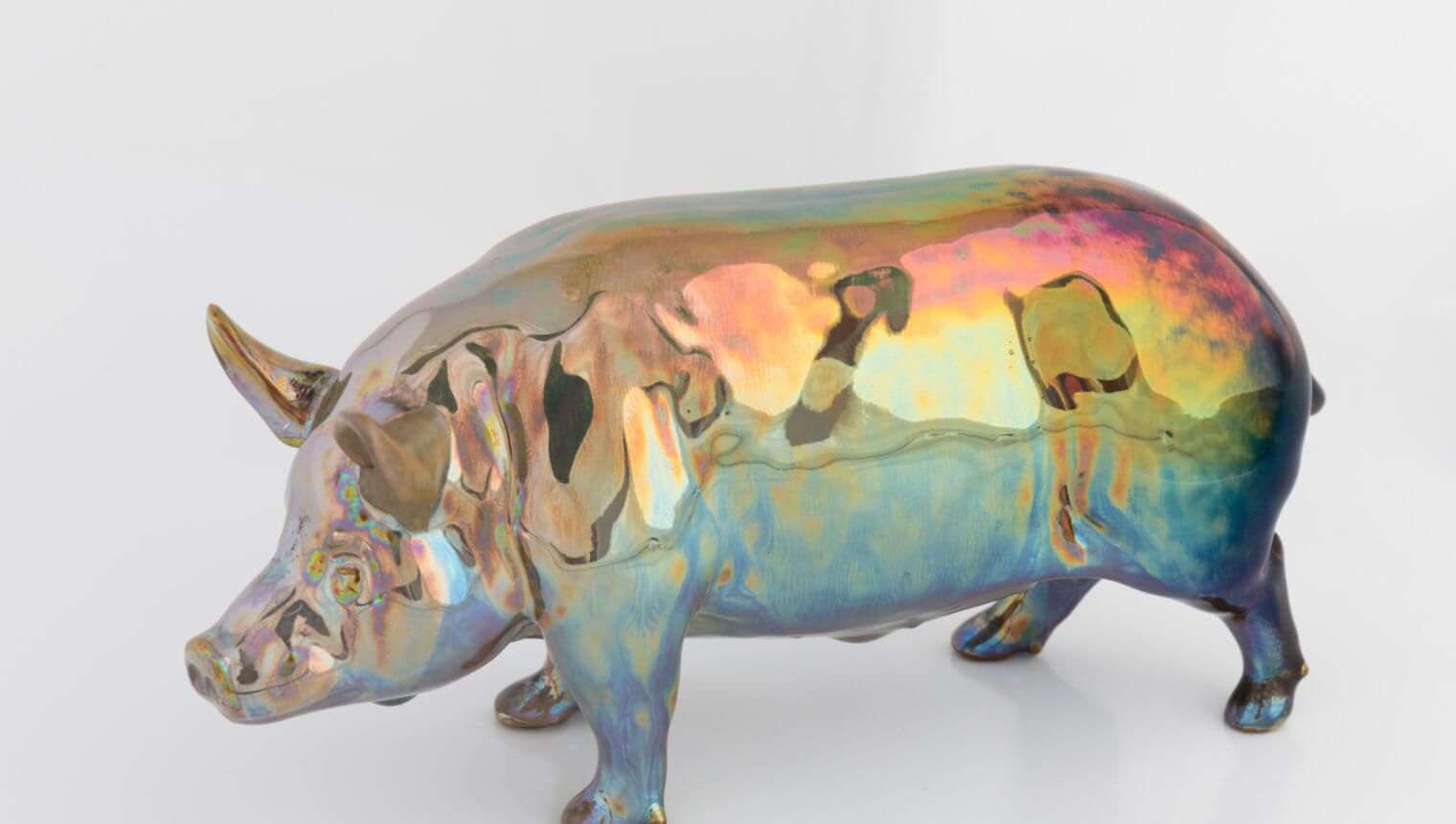 Figure of a pig with lustre glaze 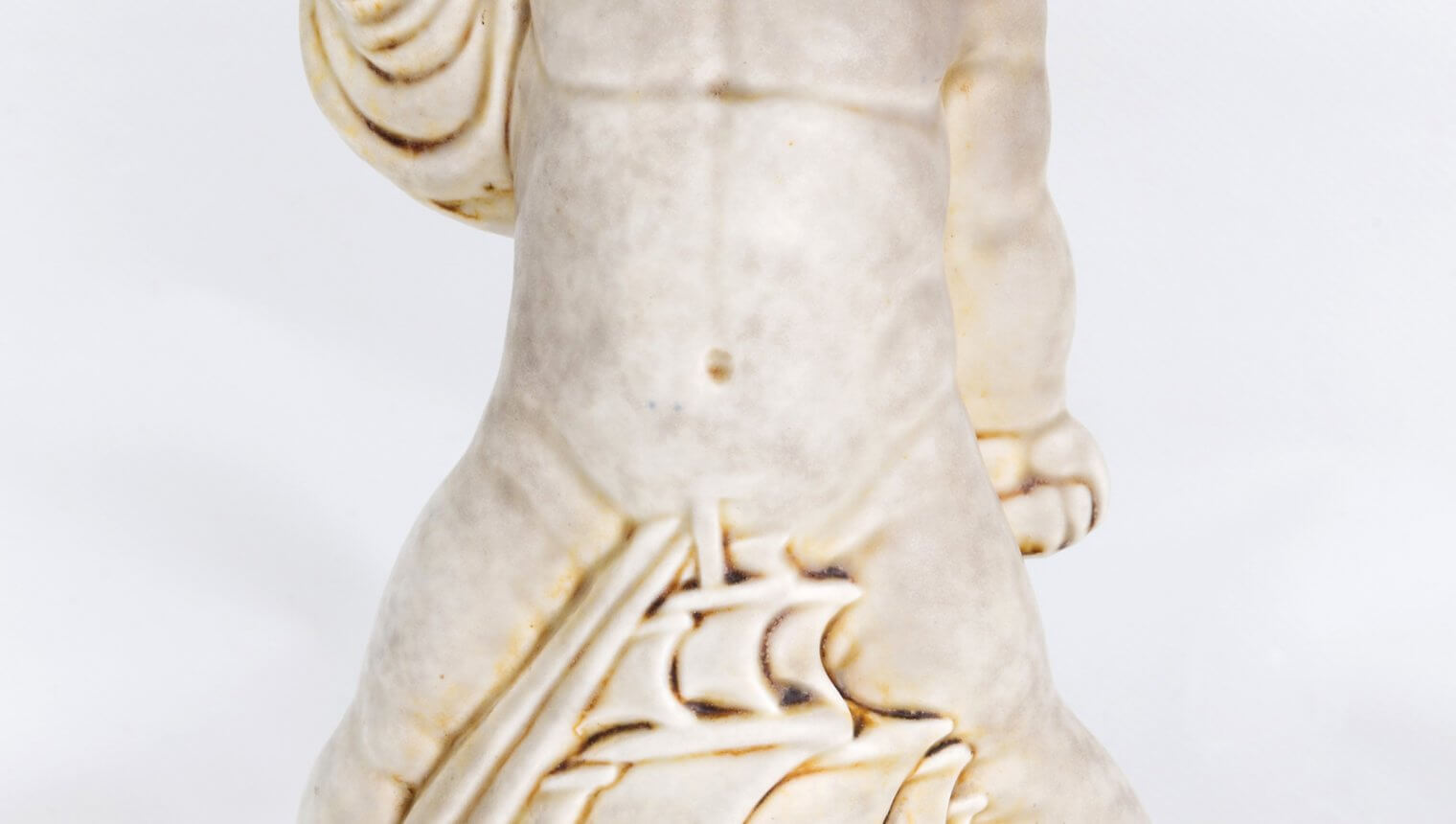 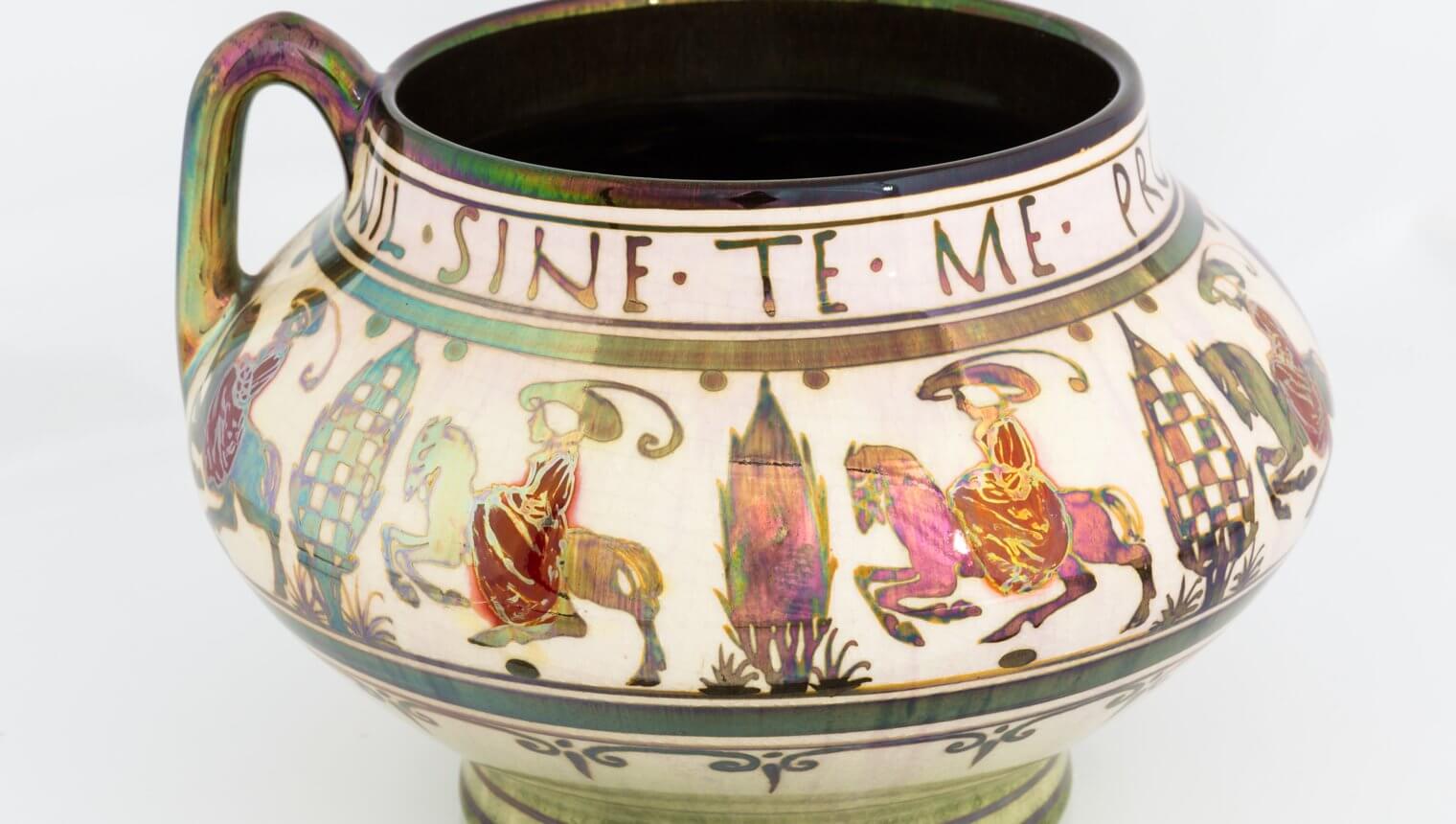 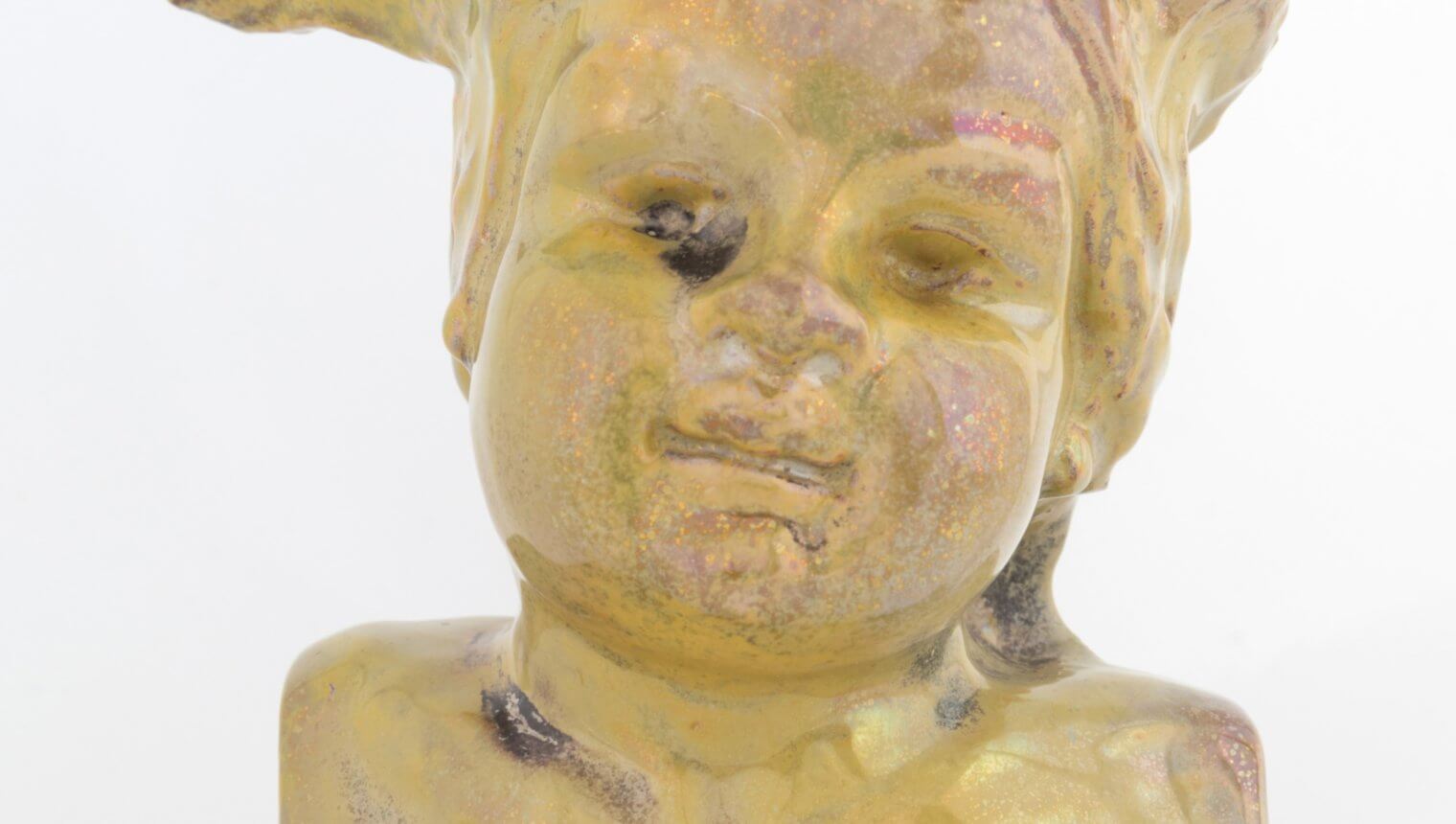 Figure of a boy’s head with lustre glaze by Gordon Forsyth, 1907