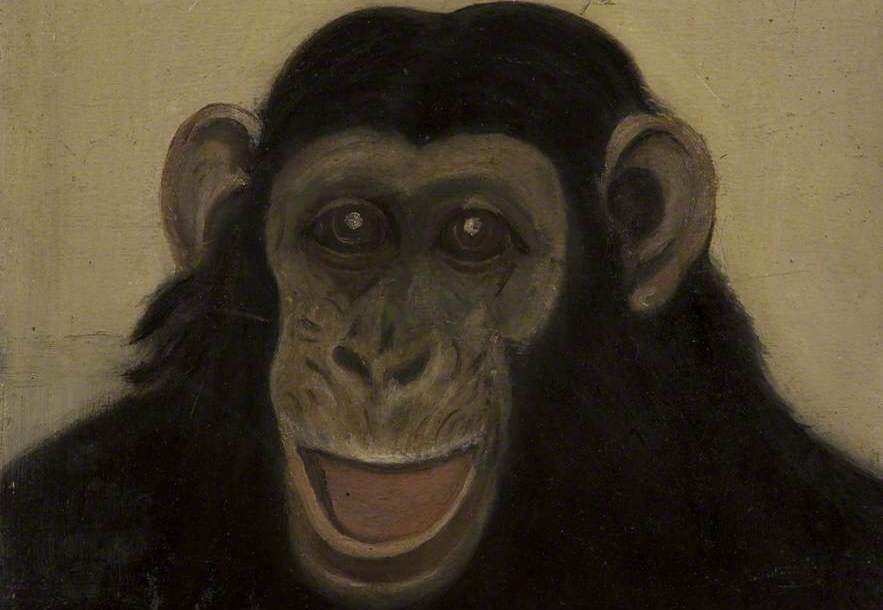 Many art galleries now have large, wide-ranging collections and every gallery organises them in a slightly different way. Often factors like the date when they were made, the country they were made in, the artistic styles they play with or the subject matter they portray are used to group and place different paintings. This can provide a great understanding of that date or style, but not necessarily of the history of the gallery or the range of art in the area.

Salford Museum and Art Gallery, which is operated by Salford Community Leisure, has found a simple way to change that, with the new exhibition, A -Z.

It’s just what it sounds like, an A to Z, an alphabet of objects and artworks from across the collections. Some pieces are well-known, others have only rarely been displayed. For everyone, there should be something new to discover.

Amongst the items at the a-z exhibition are several brilliant paintings, which are already up on ArtUK. If you are not extensively familiar with the collections here, this exhibition is a wonderful way to explore them all. But in case you’re unable to make it, or just want a little taster first, here’s a snapshot of what is on offer:

A is for ape

This is exactly what it looks like, really, the ‘Head of an Ape’. If that title seems unimaginative, there are two reasons for that: 1) unimaginative titles are extremely useful when it comes to finding relevant materials in the collections, and 2) the artist for this piece is unknown, so any more imaginative title they may have given it is a mystery to us. For the sake of our exhibition dictionary, we’ve found that an ape, is ‘A member of the Simiadæ, having no tail nor cheek-pouches; including the gorilla, chimpanzee, orangutan, and gibbons.’ Simple enough. As for this particular ape, the research continues…

P is for pig

The painting for P is brilliantly titled ‘Girl and Pig’ – that’s ‘and’, not ‘with’. The museum likes to think this means the pig was an equal participant in the composition. Its painter, Robert Colquhoun, made another work which is called ‘Man and Pig’ and was sold at Christie’s for £34,850 in 2010, along with ‘Figure in a Farmyard’, which is owned by the National Galleries of Scotland. They say that Colquhoun was inspired by a pig farm near his home at Tilty Mill, were he and his partner Robert MacBryde lived with their friend Elizabeth Smart and helped to look after her children. Colquhoun was hugely influenced by MacBryde. In the words of Christopher Barker, one of the children who they helped bring up, ‘The Two Roberts’ were one ‘unit’.

U is for untitled

A particular challenge came with U, ‘Untitled’, a work by Prunella Clough. If you’re not used to abstract art, then this painting, at first glance, might not seem to say much. But Clough was a renegade in the twentieth century art world. She sold her paintings cheaply, sometimes in sudden clearance sales. The lack of a title for this work reflects her prolific and un-precious practice. She spent her time in factories and housing estates, painting urban, industrial, grimy aspects of life. She focused in on small details and ordinary lives. Exactly what ‘Untitled’ depicts is up for debate – it is, after all, untitled – but the lines, colours, shadows and shapes, a sense of stretching and of detail, remain.

Z is for Zinnias

This piece is to all intents and purposes a simple still life. This one features zinnias, a beautifully named flower. They have an abundance of petals and bold, warm colours that contrast with the light, dainty delftware jug they’re sat in. Behind them is a window, through which bright sunlight shines in, dancing across the walls. Outside the window, we see green and specks of red indicating more flowers, more abundance. This painting is about a sense of joy and of plenty that can be found in simple things, like cutting some of the flowers from the garden to brighten up the corner of a room. Many artists use still life as an exercise – a chance to focus only on one object that will become a part of a larger composition they are planning. But James Bolivar Manson has afforded time and attention to all parts of this composition, from the texture of the wood at the bottom to the colours of the refracted light on the wall, so this piece fits more within the style of the Golden Age, in which objects told stories all by themselves.

The Salford Museum and Art Gallery team hopes that visitors will find something in this exhibition that brings them joy, whether it’s the frog in the chamber pot (yes, look out for that one!) or Robert Colquhoun’s bold lines. The brilliance of this exhibition is in it variety and the fact that these things can all sit side by side.

‘Head of an Ape’ and ‘Zinnias’ are available to purchase as prints from ArtUK.

This summer we have partnered with The National Literacy Trust to support their Salford Literacy Trail. 20 BookBench sculptures will…

Join us on 16 June for Salford Rediscovered - a celebration sprawling across the Crescent, showcasing Rediscovering Salford's artists, stories…

The Open is back for 2022! We are excited to announce that the Open is returning to Salford Museum &…